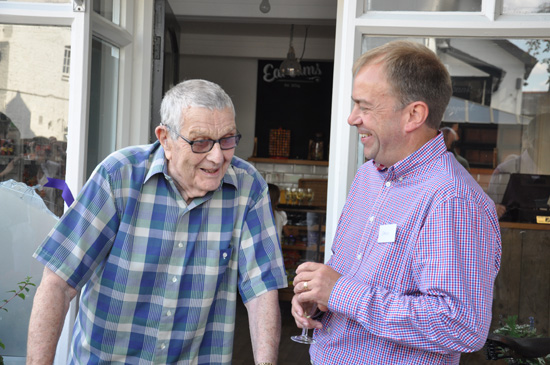 After 18 months of hard work and preparation, Earlams the community run store, cafe and gallery opened it doors for business and was met with a very enthusiastic level of interest from villagers and visitors.

The store was officially opened by guest of honour Maurice Earlam, who is 89 years old and the son of Harry Earlam, who ran the local shop for 30 years and who the business is named after. Maurice used to deliver papers with Terry Waite when they both lived in the village and he was a keen member of the cricket club, which was chaired by his father.  Maurice attended with his son Harry Earlam, daughter Ann Smith and her husband Ian.

Village shareholders, donors and supporters celebrated the launch of the business and all were impressed with the layout and produce on display.

John Novak who issued the original questionnaire canvasing villagers for their support, commented ‘the store and launch, were beyond superlatives, as it had exceeded all his expectations.’

Simon Poyser who developed the brand and business plan commented that ‘ our vision has become a reality and this has only been made possible by the tremendous amount of support given to the project by the village shareholders , donors and the growing band of volunteers who worked tirelessly. ‘

This is without doubt an exciting community project, which will make a significant impact and achieve its aim of improving Styal village as a place to live, work and visit.